Having a projector is convenient as one can use it for office needs as well as for the home. This equipment, however, is quite pricey. Fortunately, there are ways of protecting the projectors like buying the appropriate tools and accessories. The ceiling mount is one them.

When looking for a ceiling mount for projectors, one has to consider several factors. For example, what is the degree of rotation? Most ceiling mounts have 360-degrees rotation while others do not.

A buyer should also look at the capacity of the mount. How much weight can it support? If the buyer already owns a projector, then he or she has to find a mount that can support the weight of the projector. Some mounts can only accommodate small to medium units while others are built to support large ones. The distance of the mountain holes it can support is also essential. Most importantly, it is best to find a mount that has complete hardware as well as an instruction guide.

If you are on the lookout for a ceiling mount, then you may want to consider the Vantage Point CGUPM12-S Universal Front Projector Mount. Just how does it fare? 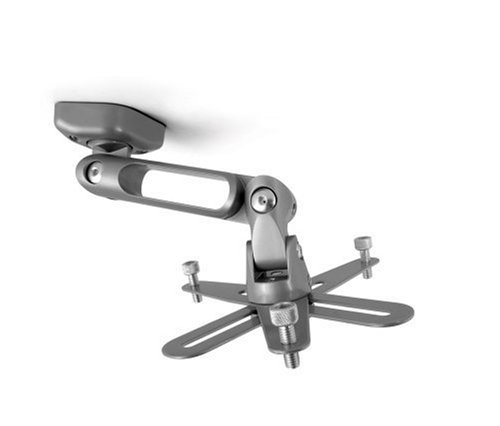 The Vantage Point CGUPM12-S Universal Front Projector promises to be a great ceiling mount for many kinds of projectors. It boasts of being a universal LCD/DLP projector mount complete with a 12-inch drop. It has a 360-degree rotation as well as tilt and yaw adjustment features.

Users have the option to adjust the item’s mounting arm one by one with its individual height adjustment feature. This universal projector mount comes in a sleek design and appearance with its steel and die-cast aluminum material and simple finish appearance.

The CGUPM06 can extend roughly 12 inches from the ceiling. It also swivels, rotates and tilts in any direction. This mount is compatible with many of the DLP and LCD home theater projectors and can support a wide variety of projectors.

This projector mount ceiling can extend around 12 inches from the ceiling and is compatible with many of the DLP and LCD home theater projectors. It has a sleek design and appearance. The item is made from steel and die-cast aluminum.

The product, however, has some flaws. For example, the large bolts are soft and tend to strip easily. Users may also have to buy additional screws and washers so that they can attach the projector to the mount. Most of all, the item only has three mounting points while many of the projectors have four.

There are other substitutes for the Vantage Point CGUPM12-S Universal Front Projector as plenty of other product makers manufacture the same item.

For example, the BenQ CM00G3 Universal Ceiling Mount is a ceiling mount that also promises excellent features. This product also has a 360-degree rotation angle and is adjustable up to 25 degrees with its angled ceiling compensation adjustment feature.

The product is also compatible with other projectors. It is made from steel and aluminum alloy and can fit most projectors with mounting holes range of up to 15 inches in diameter. It has the dimensions of 10 x 10 x 5 inches and weighs 4.56 pounds.

The BenQ CM00G3 Universal Ceiling Mount is not without its flaws, too. For one, the instruction manual that comes with the product is difficult to understand and follow. The mount is hard to adjust as well. The screws provided with the mount are of poor quality and tend to loosen up quickly.

The DYNAVISTA Full Motion Universal Ceiling Projector Mount Bracket is another competitor on the market. The item is compatible with a wide range of projectors that has around 12.1 inches or less of distance between the mounting holes.

This product is made from premium and heavy-duty steel that can support up to 30 lbs. It also boasts of a full motion adjustable feature where the mount can tilt up to 25-degrees down and up, a swivel of 90-degrees from left to right. It also has a 360-degree rotation to hit all possible viewing angles.

The mount can be extended up to 43.6 inches and is collapsible to 23 inches from the ceiling with the help of the arm. This projector mount is already pre-assembled for a comfortable and convenient installation. Plus, it has a quick-release feature that attaches and detaches the hooks by loosening and tightening of the mounting bolts.

The ceiling mount comes with an instruction booklet and hardware needed for installation. Users will no longer have to buy screws, bolts and other items needed to put the mount and projector together.

The Vantage Point CGUPM12-S Universal Front Projector has many virtues. For one, it has a 360-degree rotation, tilt, and yaw adjustment features and an individual height adjustment feature. It has a sleek design with its steel and die-cast aluminum fabrication. The product maker claims that it can support a wide range of projectors.

The item, however, has some flaws and the biggest of them all is that it is designed for three mounting points while most projectors have four.

So, is this ceiling mount worth buying? It is, but users have to identify the projector to be used with the mount before purchasing this item. Otherwise, this mount may not be what you need as it is not as universal as its product maker claims.