A projector mount is a hardware that is used to hang or attach a projector. It can be fixed to a ceiling or a wall, although more commonly, it is attached to a ceiling. Thanks to these mounts, the projector can be tilted or swiveled to cast the picture at a certain angle.

If you have a projector, it is best to get a ceiling projector mount than to struggle with finding the right angle by keeping the projector on a table. Since it is attached to the ceiling, it keeps it safe and low-profile. This is especially important in case of a home theatre since you do not want the projector to move or be a distraction constantly.

The purpose behind the mount is essentially the same. However, there are design variations and compatibility issues to consider. While most ceiling projector mounts are universal and can hang most projectors, some are not. Hence, you have to ensure that the mount you are getting is compatible with your projector.

There are two things that determine that:

The market offers a wide selection of projector mounts, which is why it can be hard to find one that will suit all your preferences. If you are looking for a projector mount that has a solid build, then we’ve got you covered. Here, we take a close look at the QualGear PRB-717-WHT Universal Projector Mount. 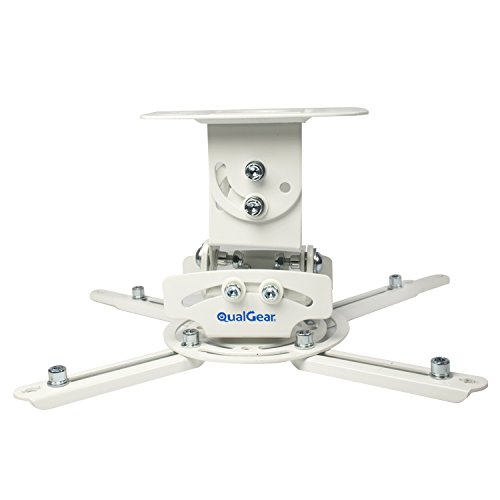 The QualGear PRB-717-WHT is not your run-of-the-mill projector mount. It is a sturdy mount with high-quality construction. It comes in the color white, which further makes inconspicuous as it blends in with the ceiling. The supported ceilings for this projector mount are concrete, wood beams, and brick.

The material used is heavy-gauge, cold-rolled stainless steel, which provides it with a weight capacity of a whopping 30 pounds. This means that it can easily mount even heavy projectors. You can use it for almost any brand of projector. The threshold is a distance between mount holes from 6.6 inches and 16 inches. The projector sits just below the ceiling at a low profile (six inches).

As for adjustments, there is plenty of room to get that perfect angle. It tilts from zero to 60 degrees, and you can also roll it 20 degrees on either side or pitch it 30 degrees. The shift is one inch whereas the swivel is 360 degrees. Working with it is rather easy as it will stay in position once you have set it to your desired position.

The installation process is quick and easy. You will not need a lot of tools or guidance; you only need to follow just three simple steps. You have to mount the ceiling plate first; then, you attach the brackets. Finally, you need to hang the projector from the mount arms.

Even though it is made from heavy-duty steel, the mount’s own weight is quite low at only two pounds. It has a snap-off-and-snap-on design that makes it easy to assemble and install. Also, the bolts are of high-quality. It comes with ample hardware to find the setting you want.

Summary of the Features

The QualGear PRB-717-WHT is a versatile and rugged steel ceiling projector mount. It works with almost any type of ceiling and any size or brand of projector. It is a low-profile mount, which means your projector would essentially be attached to the ceiling and would not appear hanging with an extension.

The brackets are sturdy and can be extended to cover a diagonal distance of 16 inches, which is more than enough to hold big and heavy projectors. It is reliable enough to keep the projector steady so that the screen appears just how you want it.

The company has provided a lot of hardware and tools to allow you to install the projector mount yourself. However, depending on your projector, you may need to get the appropriate screws to fix it in.

Looking at its features, we found that the VIVO Universal Adjustable Ceiling Projector Mount is a unit that is comparable to the one from QualGear. They are both low-profile, white ceiling mounts that are made from top-quality stainless steel.

However, the one from VIVO Universal supports a maximum distance of only 12.5 inches between mount holes. The QualGear, on the other hand, is compatible with projectors with mount holes up that are to 16 inches apart. The weight capacity is also the same, which is 30 pounds.

The design is also similar in that they both have a square ceiling plate with holes for cables. Both use extension brackets for bigger projectors. However, it seems like the QualGear allows a wider degree angle for tilting and pitching.

Another quality of QualGear that gives it an edge over the other product is that it gives a lot of possibilities with the adjustment and settings. If you are working with a compact projector, you might just need three arms. Plus, there is extra hardware to work with in order to achieve the setting you need.

There is no significant difference in terms of quality as both seem to be very versatile and heavy-duty. However, there is a price difference with the QualGear PRB-717-WHT being more expensive than the VIVO Universal projector mount. It really does come down to your budget when choosing between these two.

Obviously, if the projector mount is low-quality, it could drop your expensive projector. However, you need not worry about the QualGear as it meets the criteria for a great ceiling projector mount.

Whether you want to install a projector in a boardroom or create a home theatre, this is a great projector mount. Its tough construction, paired with many viewing angles, justifies its price, which is not too high in the first place. Plus, you will not need to hire a guy to install it too because you can just do it by yourself.