Have you ever wished you could do more with your TV? Do you dream of playing games and videos of your choice rather than switching mindlessly between channels and never-ending advertisements? Do you miss the times when your whole family used to sit together in front of the TV? With the HDML Cloner Evolve Box, all of these is possible!

The HDML Cloner box is one such hardware offering a wide range of features. Do you think this might be a device that you’d want in your home? 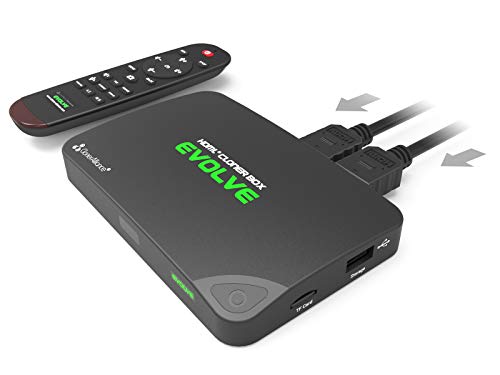 The HDML Cloner Box Evolve by ClonerAlliance allows you to use your TV in multiple ways. How does it do this? Let’s find out by looking at its many features.

This HDML cloner box has a total of three input ports. Two of them are HDMI ports while the third one is an AV port. These ports allow you to connect your laptop, camera or other devices to your TV.

With this many ports, you can connect three different devices at the same time and easily switch between them with your TV remote.

Additionally, the HDML Cloner Box allows you to record your video games with the help of external software such as XSplit. Other than that, you can also broadcast your games live on various social media networks such as YouTube, Facebook, and Instagram.

Furthermore, while recording your video, you also have the option to record your audio. This is possible due to the addition of an internal 3.5mm jack present in the HDML box. This allows you to add your commentary about the video game while recording it.

By connecting your USB or TF card to the HDML-Cloner Evolve Box, you can store your videos in them. This saves you from the hassle of connecting your computer to the HDML-Cloner to store your videos. The videos are saved in high quality with 1080 pixels by using NTFS formatting storage device. The recorded MP4 files are compatible with PC and other devices.

Many of the videos in old times used to be in analog form. With the help of HDML-Cloner Evolve Box, you can now convert them into digital form and play them on your TV.

If you seem to miss your favorite episodes or your favorite game, then this feature is made for you. You can set up the time you want the HDML-Cloner Box to start recording and carry on with your chores stress-free.

You can now capture your favorite scenes from movies or hilarious scenes from videos and save them in your gallery. The HDML-Cloner Evolve Box allows you to do this with just one click on the remote control button.

Summary of the Features

If you have been missing out on your favorite episodes or major gaming sessions, the HDML-Cloner Evolve Box is what you need. This is because it offers many advanced features, such as multiple input ports, video recording, and snapshots.

Apart from this, you can also relive your favorite childhood memories by watching videos of your birthday and tea parties. This is possible due to the feature of converting analog videos to digital ones offered by HDML-Cloner Box.

Comparison with a Similar Device

Due to the increasing demand and significance, there are a lot of different HDML boxes available in the market. We have made it easier for you to decide which one to buy by comparing the HDML evolve box with the popular AVerMedia EzRecorder.

Firstly, the HDML-Cloner Evolve offers you with multiple ports. These include two HDMI ports and one AV port. On the other hand, the AVerMedia EzRecorder features only two ports. Both of these ports are HDMI, so devices such as VCR cannot be connected to the TV.

Devices such as VCR stores and captures videos in the form of analog video. In order to play them in your PC and other devices, you first need to digitize them. Thankfully, the HDML-Cloner Box allows you to digitize these videos and watch them on TV.

Secondly, when it comes to portability, the HDML-Cloner Evolve Box is more portable, weighing only 3.5 ounces. AVerMedia EzRecorder, on the other hand, weighs twice as much at 6.08 ounces.

Apart from this, HDML-Cloner Evolve Box has a smaller size with dimensions 5.12 x 3.35 x 0.63 inches. On the other hand, the AVerMedia EzRecoder has the dimensions 8 x 6 x 2 inches.

Fourthly, both of the hardware have the feature of schedule recording. HDML-Cloner Evolve Box allows you to have multiple scheduled recording at a time. AVerMedia EzRecoder, however, allows you to have only one scheduled recording at one time. Thus, if you’re a person who wants to record multiple episodes at different times, the HDML-Cloner Evolve is what you need.

If you want something more out of your TV other than just shows and advertisements, then you should consider getting the HDML-Cloner Evolve Box. It does not only make TV compatible to the needs of all of your family members but can also play a significant role in bringing your family members out of their rooms to sit together, watch games and shows, and bond over them.

Furthermore, this device also allows you to cherish and relive your childhood memories by connecting it with VCR, where most childhood videos are stored. You can also schedule it whenever you want to record your favorite shows, so you do not miss out on the fun.