A center channel speaker can be called as the forefront of your home theater system in the event that you are setting up one. However, it can either make or break your listening experience if you decide to use it as a wall or bookshelf speaker. With those in mind, you really should get something that has the complete package, not just for great lows, but also a speaker that can capture faint mids and aggressive highs.

This product has an all new soft dome tweeter for its design and there is a quad woofer configuration for the driver. With these two features working hand in hand, the speaker can support effects and vocals on a new dimension as well as deliver good midrange clarity of sound.

It also has four drivers which measure 5 1/4 inches. This will ensure that there is a mature performance when you set it in different volumes. It is also ready to be paired with an amplifier that you like if you want to give it a boost.

As for the configuration settings, you can choose from eight models of the SL Series. In this way, you can adjust how the sound will be produced based on the room that you are going to place it in. So whether it is a small or a large room, it can be filled with clear sound.

Also, the Cerwin-Vega SL-45C Center Channel Speaker was engineered for intelligibility and vocal clarity. It also has a classic style because it has a removable grille.

Its frequency response is 55 Hz - 26 kHz and the power handling in watts is 300 at its peak. As for the sensitivity of the peak, it is 89dB and it has 8ohms for the nominal impedance.

The Cerwin-Vega SL-45C Center Channel Speaker is a product that you can use for your home theater system as well as for your general listening needs. It comes with everything you need for you to be able to enjoy your music and movies.

It is a great option if you are someone who appreciates clarity in lows as well as a sound distinction for the mids and the highs. Moreover, it has a relatively good peak so you are assured that there will not be too much trembling when it is producing intense sounds.

On the other hand, the Cerwin-Vega SL-45C Center Channel Speaker is the type of speaker that will not be appreciated by those who are not that knowledgeable in tweaking the settings of previous units.

One might expect a rather booming sound that sounds like something from a well when you set it up for the first time, but all is well after you use the right settings. In order to appreciate the quality of the build, one must already know how to properly set up its eight different modes. 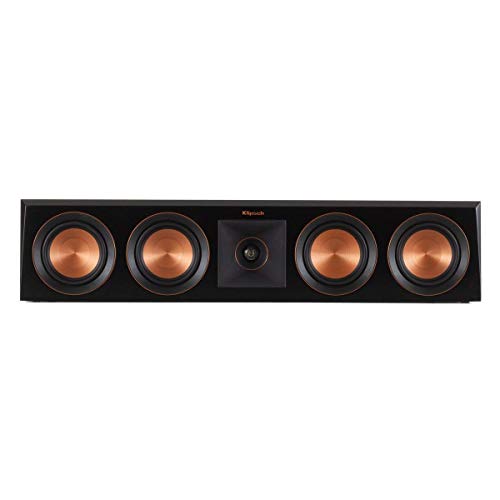 Let us now compare the Cerwin-Vega SL-45C Center Channel Speaker with the Klipsch RP-404C Center Channel Speaker. The latter can also be used for a home theater system and for general listening. It has a titanium vented tweeter that measures one inch, which also comes with a hybrid tracery horn. As for its woofers, there are four of them, and all of which are made of spun copper and they measure four inches.

A bass reflex that is done through the use of the rear-fired tracery port is also included. Its trim rings are also anodized with copper and it has aluminum casted feet.

The baffles are painted in satin and the logo was etched with a laser. Overall, the design looks classic with a bit of a rocker edge.

As for the terminals, they are single- and five-way screw types in which you can use banana plugs or bare wire. Just keep in mind that it should only be up to 12 gauge for a lasting and secure connection.

It is also color-coded for convenience. Its removable grille can be attached with the use of magnets so there is a smooth transition in removing and attaching it.

What is so special about this center channel speaker is it makes use of Tractix geometry. This means it has the fastest air transfer from the cabinet to the environments. This produces a sound that has reduced noise as well as low frequencies that are punchier.

There are also inner flares that help in reducing air turbulence which tends to enter the port, so this also helps to have a clearer sound and bass that is more powerful.

So which one is the better unit? We are still going to stick with our guns and go for the Cerwin-Vega SL-45C Center Channel Speaker. It might be a bit daunting to tweak the settings of this center channel speaker at first, but trust us when we say that all of it will be worth it.

Definitely, this is a unit that will stand the test of time but also provide you with high-quality sounds. When set up properly, you can hear every bit of sound from the movie or music that you are playing, even sounds that you might not even know were there. This is a perfect addition to your home system as it can also enhance the performance of other speakers that you will add later on.