For years, consumers have been interested in giving themselves an experience that mirrors the cinematic screen. However, because of space and budget limitations, it may be a bit impossible for them to get the complete experience in the comfort of their homes. The closest they may come to realizing the experience is by setting up a home theater system of their own. The display, sound and connected media devices all contribute to the experience. The display has become very competitive, and one that has become a popular choice is a projector.

In case you are not truly familiar with it, a projector is a device that they use in cinemas to project an image to the screen. When using a projector, you have a lot of flexibility in determining the size of the display that you want to get. For instance, the farther you place it, the larger the image appears on the screen and vice versa. The word ‘screen’ can be used loosely because projector images can even be viewed on a wall.

However, some people like to use their projectors with screens. If you choose a screen, rather than using it against a wall, that is an additional expense that you will have. Another expense that you will incur is the cost of replacing the projector lamp. Projector lamps have a certain number of hours assigned to them, and the lamps are very expensive to replace. Hence, you should check the cost of a replacement lamp as well as the lamp life before purchasing a projector. Nonetheless, there are many benefits of using a projector over a television.

With that said, if you are considering to buy a projector to add to your home theater set up, then you should consider shopping around and comparing different brands. Apart from the projector lamp, each brand will have a feature that you’re more biased towards and a price that you may or may not prefer. Luckily for you, this article will review the functionality and make of the Blusmart LED-9 Home Video Projector.

The BluSmart LED-9 Home Video Projector is a display that you may be eager to use for your home theater system. The product can be used to connect to your computer, gaming devices, and TV or Video Devices. 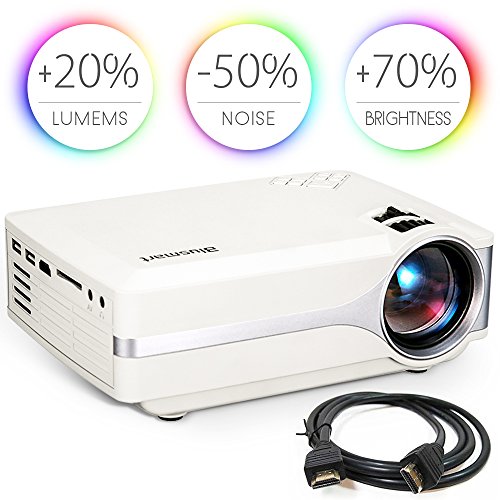 BluSmart offers its customers a three-year warranty period within which they have access to customer service support. They also guarantee a 24-hour window in which your queries will be answered.

The projector is able to offer clearer images than television as it uses diffuse reflection to avoid a direct light source. This means that you put less strain and cause less harm to your eyes while having a comfortable viewing experience. The images can also extend up to 130 inches.

Compared to other projectors, this projector is quieter as it has an upgraded technology used for cooling it. This means that you will be less distracted when using the projector as there is no background noise.

Before the projector is shipped, it goes through a full testing to ensure its functionality.

Some projectors available today are wireless. They have both Bluetooth and WiFi connectivity. BluSmart’s projector lacks that feature.

If you were hoping for a multi-use application, the manufacturer has advised against using this projector in business or powerpoint presentations as it is brighter than a typical LED projector.

The projector is intended to show large images. If you intend to buy this projector, you should ensure that the intended space is large enough as there is barely any ‘zoom out’ and the image can potentially overwhelm the space.

The BluSmart Home Projector is a display that is capable of accepting multiple media. BluSmart claims that the projector is on average 60% brighter than your ordinary LED projector, and that feature makes it unsuitable for use in business.

If you were to buy this projector, it is recommended that it be set up with a distance of 2.5 meters for the best image size of 130 inches. As it is intended to project large images, it should only be used in a large room as zooming out is difficult. Nonetheless, this product produces images with good clarity level, and you will not be distracted while watching or playing as this has a low noise level.

Comparison with another Brand 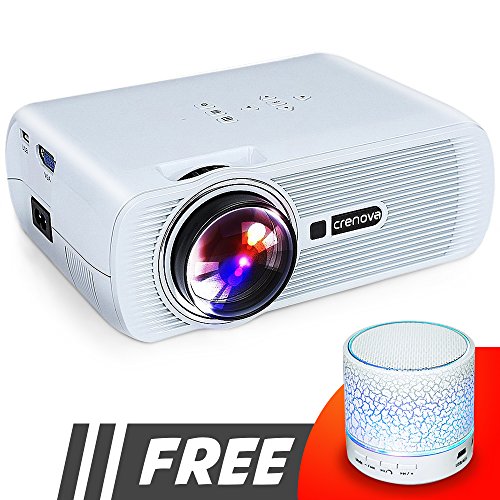 Crenova’s Projector has a resolution of 1080 pixels, and it also uses LED technology. Like the BluSmart Projector, it too can connect to multiple media devices including your computer, gaming devices, SD cards, Apple and Android devices. It also comes with HDMI connectivity and a free cable is included with your purchase. It also does not have wireless capabilities. However, unlike the BluSmart Projector, the one from Crenova only comes with only a 12-month warranty period. Nonetheless, you do get customer support during that period.

Another prominent difference between the two brands is the recommended distance to produce an image size of 130 inches. BluSmart is at 2.5 meters while Crenova recommends is at 3.8 meters. You should also know that while BluSmart uses a different technology to aid in noise reduction, Crenova creates a noise coming from the fan as a result of high temperature.

The BluSmart Projector seems like an excellent choice for your home theater needs, especially if you have enough space. What is better is that it will not put a hole in your pocket. It stands up well against the competitors, despite most of them having similar features. The differences in features though are only minor, so there is nothing to worry about.